What does Soft Start mean?

Soft start is the gradual turning on of an electronic power supply to avoid stressing the components by the sudden current or voltage surges associated with the initial charging of capacitors and transformers.

The soft start function in a power supply circuit minimizes large startup currents from flowing when the input power is first applied. As power is first applied to a circuit, the capacitors must be charged from zero to their final values, while the inductors and transformers need to have their flux stabilized. Likewise, the integrated circuits and other active components must change from the inactive states to active states.

These actions cause the input impedance of the circuit to appear as being very low, thereby causing large inrush currents to flow. The large input currents can damage the circuit components and cause short circuits which may also affect the mains supply, hence the need to control the circuit behavior at switch-on.

A soft start circuit gradually increases the startup current from zero to the final value and allow the output voltage to rise at a slower rate, resulting to a lower peak current required for the startup.

The soft start using a delaying circuit ranging from a few microseconds to seconds, ensures that the current and output voltage is given time to build up without stressing the components. This allows the capacitors to charge, transformers and inductors to attain stabilized flux, and ICs to change into their active states at a safe pace.

There are various ways of implementing the soft start either using discrete components or the integrated circuits. The choice depends on power rating of the supply, the circuit design and desired soft start period which varies from one design to the other.

The soft start circuit introduces temporary high resistance at the input for a time determined by the desired short start period. Once the components are fully charged, the high resistance is removed either by short circuiting the resistive device using a relay, or a switching device such as a transistor or thyristor.

A typical soft start circuit arrangement has a resistor in series with the mains supply. This operates for a brief period of a few seconds during the switch-on, after which it is removed by a timing device which operates a switching device such as a triac, or a relay. The switching device short circuits the resistor and remains in this state till the supply is switched off.

There are two main ways in which the timing circuit controls the switching device:

Another method, even though not very efficient is to use an NTC thermistor. This has a high resistance when cold, and as current passes through, it heats up and its resistance decreases. This is a simple solution and does not require to be short circuited by the the switching device. However, the device might be unstable or cause problems if power failure occurs and the power returns before the device has cooled enough to attain its high resistance. 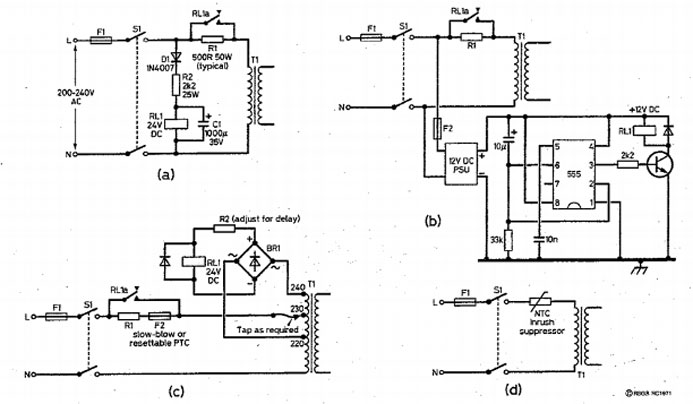 Relays in the circuits above can be replaced by active switching devices such as a power transistors or thyristors.

The soft start time must be sufficient enough to allow the capacitors to charge, and the transformers and active components to stabilize.

Besides the limiting of high inrush currents associated with the initial power switch on, the soft-start circuits are also used for power sequencing when multiple power supplies are used to power a load.