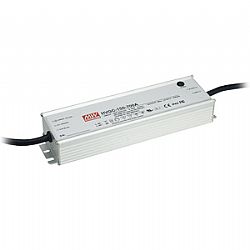 admin
MEAN WELL DIRECT News
Comments are off for this post

After the launch of HVG(C)-100 (100W) series, MEAN WELL announced the extension of its HVG(C)-150 series of 150W AC/DC high input voltage LED power supply, in order to fulfill the higher wattage requirements for LED lighting applications. Compared with HVG(C)-100, the input voltage range of HVG(C)-150 had been increased to 180~528VAC, thus, they are fit for the general 230VAC main input, and also can be operated under 347/440/480VAC input in USA, Japan, and Canada. Designed with constant voltage (C.V.) plus constant current (C.C.) mode, HVG-150 series are low voltage output models (54VDC Max.) while HVGC-150 are high voltage output models (428VDC Max.). Both series are built-in two-stage PFC function, so that they can meet the harmonic current limitation per EN61000-3-2 Class C (>50~55% load), and they also fulfill PF>0.9 if loading over 50% (>70% load under 480VAC). In addition, they possess 4KV surge immunity (EN61000-4-5) ability which complies with the requirements of street lighting.

HVG(C)-150 has three options (A/B/D type) in different mechanisms and functions for your selection. In A type of HVG-150, users can adjust DC current range from 50% to 100% and output voltage ±10% by removing the rubber stopper on the cover. In A type of HVGC-150, users can adjust DC current range from 60% to 100%; B type models are equipped with three-in-one dimming function (0~10VDC, PWM, resistance) while D type models (optional) are equipped with “multiple stage timer dimming” function that can be customized by request. In addition, these two series possess up to 91.5% high efficiency, so they can be cooled by free air convection from -40°C to +70°C ambient temperature and meet the high ambient temperature requirements for closed systems. In order to fit in with the outdoor harsh environments, aluminum case with fully potted by glue (IP65/67 structure) are also designed in these new power units. Beside standard functions of protections for short circuit, over voltage, overload, and over temperature, HVG(C)150 complies with global certificates per UL/CUL/FCC for HVG-150 and UL/CUL/TUV/CB/FCC/CE for HVGC-150, including UL8750 and EN61347-2-13 of lighting regulations. They are very suitable to be used in LED street lighting, LED high bay lighting, LED outdoor lighting and parking lot lighting…etc.

WE REMAIN OPEN. We have staff available to take your calls, process your orders & are operating non-contact deliveries. Click Here for Full Statement
Dismiss